Spiritual Motherhood of Priests Apostolate has a few events during the year!

All new women wishing to become spiritual mothers are to go through a
1 ½  days of Formation; a few weeks later, they profess their life-offering promises
to God before the Archbishop of the diocese during the Holy Mass and Induction
Ceremony.

Throughout the winter months there may be one or two “in-person” or “zoom”
meetings (duration: at the most 2 hours) with the spiritual mothers to come
together as “One” for spiritual reflection with a “question and answer period”. We
may have a guest speaker at these meetings. Below are some excerpts written by
“Steven John Lichtman, a student of theology from 2005, though just as important
and relevant today.

The importance of RETREATS: “A retreat refreshes and revitalizes, gives the opportunity for
more time spent in prayer and contemplation, and rekindles and deepens one’s relationship with
God. One may take this opportunity to more clearly hear God’s call and to seek God’s healing
grace and thereby attain a degree of spiritual renewal.”

Jesus spent 40 days in the desert praying and fasting as a way to prepare for the important
work ahead…. including our spiritual mothers where we can be “little Mary’s). “Very early in
the morning, while it was still dark, Jesus got up, left the house and went off to a solitary place,
where He prayed. Simon and his companions went to look for Him, and when they found Him,
they exclaimed: “Everyone is looking for You!” (Mark 1: 35–37; see also Luke 4:42) He
undertook His solitary respite not when there were no other important matters to tend to, but
because of the essential need to make time for prayer despite all the things to be done.
Sometimes Jesus would spend an entire night in retreat: “In those days He departed to the
mountain to pray, and He spent the night in prayer to God. (Luke 6:12). And, this is also
relayed: “The apostles gathered together with Jesus and reported all they had done and taught.

Obligatory for all spiritual mothers— the 11th Anniversary Conference (11:00 a.m. – 4:15 p.m.) will be held on ZOOM–registration required. After confirmation of registration, link for Zoom will be sent out the day before conference.

Please note that the conference is opened to all men, women, priests and religious.

Fr. John Vandenakker was born and raised in Ottawa, Ontario, Canada. He was ordained to the priesthood in 1985. Since then he has belonged to a new community of priests known as the Companions of the Cross. Some of his previous assignments include:
Assistant Professor of Systematic Theology / Spiritual Director, Sacred Heart Major Seminary, Detroit, MI (2012 – present)
Pastor of Queen of Peace parish, Houston, TX (2008-12)
Assistant Professor of Theology, Dominican College, Ottawa, ON (2000-2008)
Moderator of the Companions of the Cross (1997-2000)
Pastor of St. Maurice parish, Ottawa, ON (1993-1997)
Other parish & community assignments & teaching (St. Paul University, Ottawa, ON + St. Augustine Seminary, Toronto, ON)
Fr. John lives in residence with his fellow Companions of the Cross priests and seminarians at Visitation House, Detroit (in the former P.I.M.E. Residence & Office). On Sundays he assists with Masses at various AoD parishes.

Fr. Roger Vandenakker Before joining the Companions of the Cross as a founding member in the summer of 1984 he was completing his B.A. in Religious Studies at St. Michael’s College, University of Toronto. Having been born and raised in Ottawa, he attended St. Pius X High School, and was a student of Fr. Bob Bedard. He was closely associated with him throughout his high school years as a member of the St. Pius X charismatic prayer group which he oversaw. He began meeting with Fr. Bob and three other young men in the summer of 1984 after having returned to Ottawa to enter the seminary, having discerned a call to the priesthood the previous summer. At that time the purpose of this group was simply to provide mutual support in their common vocation to the priesthood through weekly meetings involving common charismatic prayer and personal sharing and fellowship. By the following May, 1985 it became clear to them that the Lord wanted to establish a new community of priests, as a real brotherhood with a common life, spirituality and mission. At present, he is the General Superior of the Companions of the Cross. 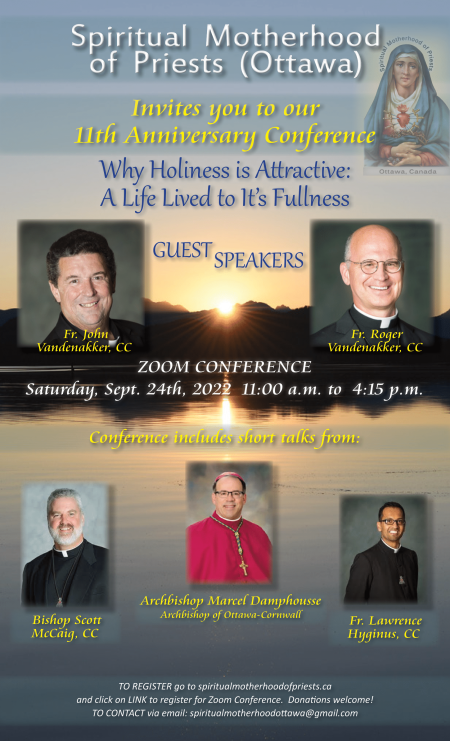 June 25th, 2022
Obligatory for Renewal Promises from the Spiritual Mothers

You are invited to the Mass and Renewal Promises on Saturday, June 25th (Feast of the Immaculate Heart of Mary) at 2 p.m. 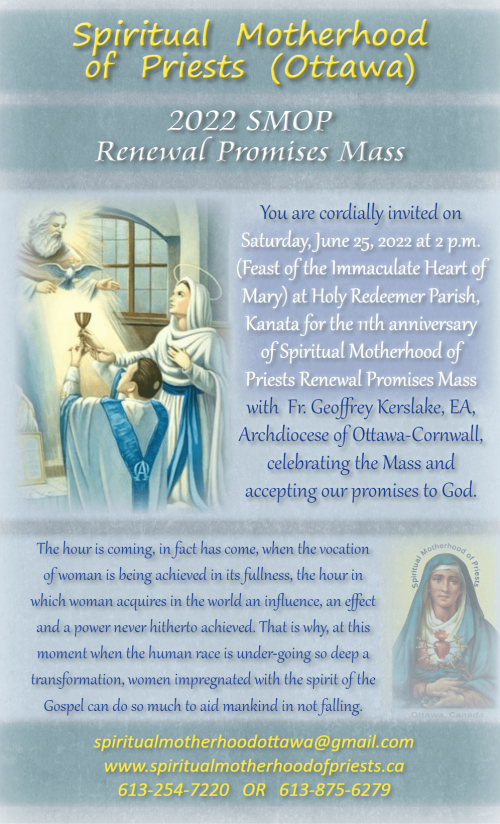 Donate to the Conference

Obligatory for all spiritual mothers—Due to Covid-19,  the 2021 Conference (11:00 a.m. – 4:15 p.m.) will be held on ZOOM–registration required.  After confirmation of registration, link for Zoom will be sent out the day before conference.

Please note that the conference is opened to all men, women, priests and religious.

Peter Herbeck is the vice president and director of missions for Renewal Ministries. For more than thirty years, he has been actively involved in evangelization and Catholic renewal throughout the US, Canada, Africa, and Eastern Europe. Peter is a co-host for the weekly television program The Choices We Face. He also hosts the daily radio show Fire on the Earth. He is a frequent conference speaker, has authored When the Spirit Comes in Power and When the Spirit Speaks, and has produced CDs and booklets about discipleship and life in the Spirit. Peter and his wife, Debbie, have four children and seven grandchildren, and reside in Ann Arbor, Michigan. 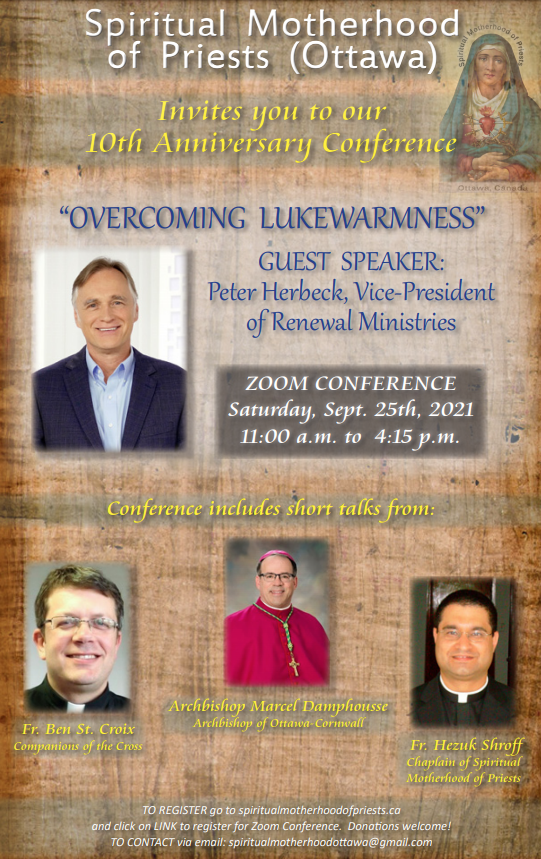 SMOP is inviting you to a scheduled Zoom meeting to recite Our Lady of Seven Sorrows; Litany and Consecration Prayer in honour of Our Patroness.

Obligatory for New Promises and Renewal Promises from Spiritual Mothers—
Registration will be required– https://holyredeemerkanata.flocknote.com/signup/62817 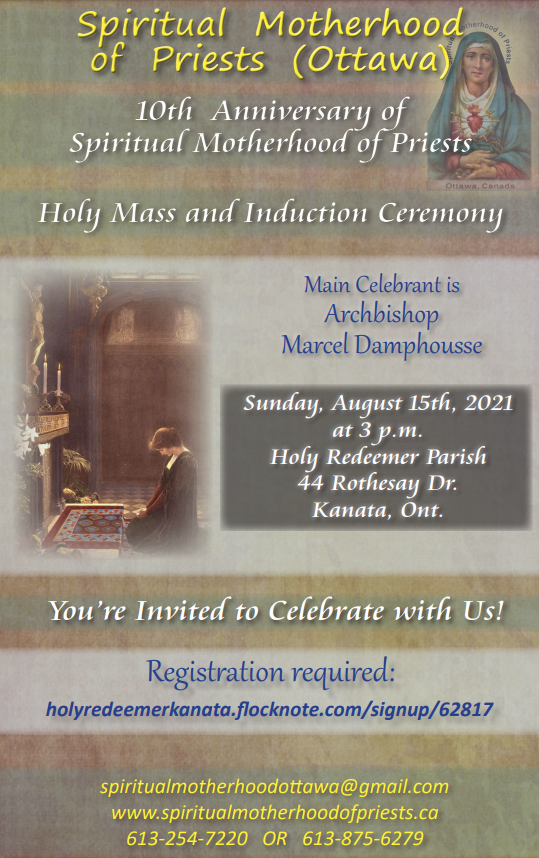 Theme:  “Staying Grounded in Times Such as These”

And Fr. Roger Vandenakker, CC, General Superior of the Companions of the Cross

Theme:  Our Triumph through Mary

Theme:  Our Lady of Good Success  …..  Prophecies for our Times

Theme:  The Love of God

Theme:  “Standing up for our faith”

Please visit our booth at the Renewal Ministries “Lift Jesus Higher Rally” at the Metro Convention Centre in Toronto, Ontario on March 2, 2013.